24 miles—approximately 30 minutes—head south on I-75 to State Route 73 and go right onto Second Street in Franklin. Follow to bottom of hill and turn left on Riley Blvd and drive to the south end of town where you continue on to State Route 73 southbound. Proceed to Central Avenue in Middletown and turn right. The Pendleton Art Center is one block west on the northeast corner of Central and Broad Street (1105 Central Ave). Turn right on Broad Street, park along side of the building or in the public lot behind the building. 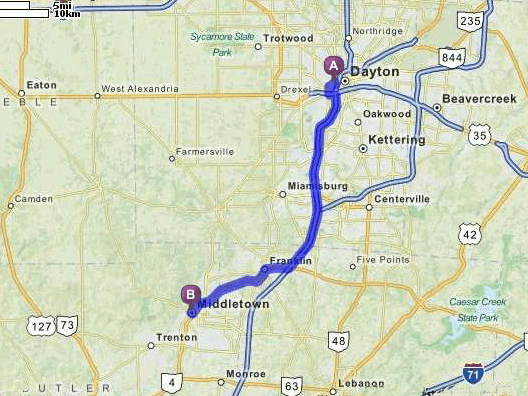 25 miles—approximately 27 minutes—head north on I-75 to State Route 122 and go left at the bottom of the ramp. Follow 122 about 4.7 miles to the west until you get to Central Avenue. Turn left and proceed one half mile. The Pendleton Art Center is one block west of Verity Parkway on the northeast corner of Central and Broad Street (1105 Central Ave). Turn right on Broad Street, park along side of the building or in the public lot behind the building. 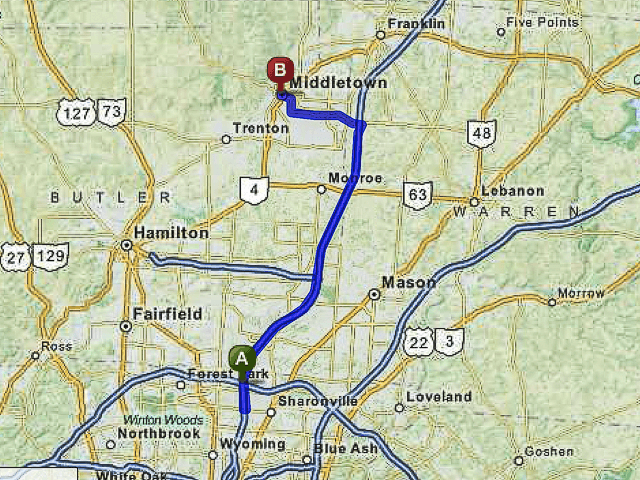 The exact GPS coordinates for Stagecraft Production Service at the Middletown, Ohio Pendleton Art Center are: N39.51656 W084.40266 Elevation: 645 feet. From here the entire Middletown Arts District is an easy one or two block walk. The Middletown Arts Center is just a block to the north, Cincinnati State University Middletown campus is a block to the west. BeauVerre-Riordin Stained Glass is diagonally across the street. The Pendleton Events Center is upstairs. The popular Windamere Event Center is just one block west on the corner of Central and Main Street and is a beautiful venue for weddings and other events. Two blocks to the southwest, you'll find the Sorg Opera House now being brought back to life.

Numerous shops selling antiques and other interesting things are within a couple of blocks east and west on Central Avenue. The Middletown YMCA is just across the parking lot to the northwest. Governors's Park is directly across the street where the Broad Street Bash is held during the summer months on Wednesday evenings. Adjacent to the park is the Square Restaurant and Murphy's Landing Restaurant—and— the PAC features Middletown's favorite Potato Bar cafe right inside. The cafe brings art, food, and fun together in one place—what a brilliant idea! If you haven't tried it yet, don't delay...it will quickly become your go to place for a great meal at extremely reasonable prices. 30 other studios and galleries representing a wide range of artists. More information about the Pendleton Art Center is available at Pendleton artist's Facebook page.